Its been a long month.

I haven't used this blog thing in a while because I was sad.
We lost a member of the crew a few weeks ago. 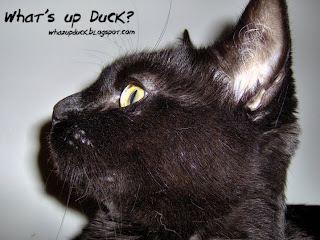 Side view from his mug shots MOL!
He was a gallant bug sniper in the last big bug hunt; got the lost bug hours before most realized it wasn't going to be found. He may have walked funny and bonked all of us with his nose a little too hard when going in for a face sniff because of his disablity but he was family. When he jumped he flew unlike any cat I have ever met and maybe he didn't always land right, but he got right back up and tried it again. He was good at climbing too. He'd climb all over the place, anything he could sink his claws into. 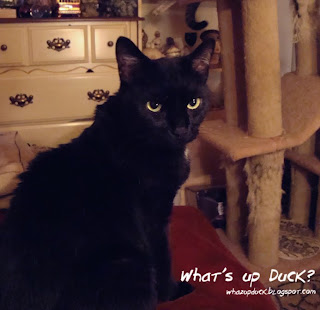 Toby, hogging the bed as usual! :)

Toby we are all going to miss your funny antics, your strange fondness for dressing up on halloween (which also happened to be your birthday), your slightly bobbing head and loud footsteps. We are going to miss your voice calling out late at night when you think you're all alone. We are going to miss everything (ok maybe we won't miss the hogging of the bed but we always had another bed to choose from) about you because you were one of us. We will even miss the fights that happened ever now and then because when it was all said and done there was always a quiet snuggle to be had. You were always such a happy cat.

I never got around to properly introducing you, and for that I am sorry. I hope this makes up for in in some way. 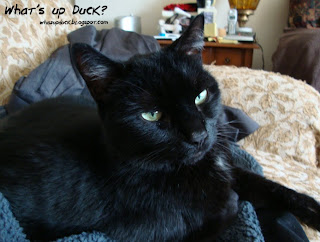 See you at the rainbow bridge someday buddy.
Meowed by What's up Duck? at 10:26 PM No comments:

Email ThisBlogThis!Share to TwitterShare to FacebookShare to Pinterest
Labels: cerebellar hypoplasia, my human gave me that big word, no idea what it is, rainbow bridge, tobias cupid, toby

Meet the newest member of the crew! 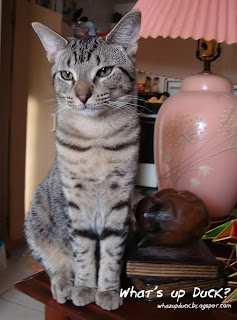 Tiggy Ponders the meaning of hairballs

Seeing as the T brothers (Tiny and Tiger) were only honorary crew and have since moved on to their new homes we just had to find a new crew member whose name starts with a T.

Meet Tiggy!
He's my nannybug's newest apprentice and one of my favorite sparring partners. Plus he hasn't gone for his vet sleep over yet so I can pull that winning battle move of mine hehehe

He's not to bad for such a skinny little guy, he moves fast as lightning. He already excels at wrapping his tail around the humans and getting them to spoil him, something my sister Patches highly approves of for as long as it doesn't interfere with her manipulation time or attention. 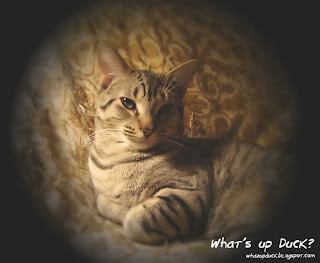