Updates on the crew

It's been a while since I did any updates on the crew so I'll just take this time seeing as the humans aren't hogging the computer again.

Many bugs have been caught and eaten over the last few months, a great many kibbles too. The catnip has been flowing freely and the crinkle ball has been particularly sneaky hiding away when I wasn't looking forcing me into 'stalk it' mode.

Tiggy finally had his overnight sleepover at the vet's house so now my favorite wrestling move "Ball Bite" is doing nothing at all. It's a shame as it's my best move but now everyone is immune to it (of course Patches was born immune, so unfair!).

Teddy and Bambi have been doing the twin snuggle a lot except when it was hot, then they escaped to the basement where it is cooler.

I was forced to defend the land of Duckia north of the waterheater AGAIN. I think that area will always be under dispute seeing as the humans continually try to shoo me off the top of the waterheater. Still I will continue to take it back as it is mine no matter how many times I am driven away.

Patches has pretty much been herself, bratty as ever picking fights then squealing for her favorite human when anyone manages to pin her. Currently she is chasing a fake furry mouse across the floor as though it were real. MOL! My crinkleball is so much cooler.

The 3 old furts Rocky, Mimi and Spooky have been keeping to themselves for the most part. Spooky and Rocky grooming each other and talking loud enough to wake the humans, Mimi hiding off on her own somewhere.

My nannybug, when not sleeping on his favorite human's bed, has been teaching Tiggy some battle moves, mostly so Patches won't know what hit her next time she picks on him and partly because he has become too friendly with Patches, the little traitor!

Smokey and Missy have been hanging out in the basement window when it was hot and the regular room windows when it wasn't. I hang out in windows, but those two live there during the summer when not smacking us around (Missy thinks she is sheriff of Duckia) or hunting real mice (Smokey, the mouse bandit).

Things have overall been good. Oh and look what the humans just did MOL! 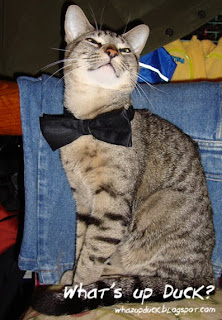 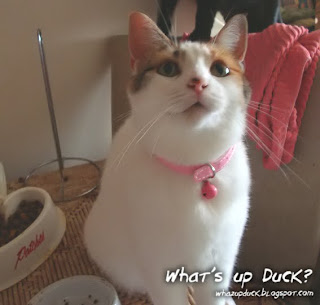 I am so not wearing one of those! *run run run*
MOL Patches is jingling!
Meowed by What's up Duck? at 7:41 AM