It's been a while since I've padded across the internets. Snow has fallen outside once more and we've all been rather occupied with trying to catch it.

Tiggy has managed to steal quite a few toys off the selves in the hallway, but for some reason the human just seems to get angry and puts them back on the shelf. Ok so he broke one, how was he to know that toy frog was gonna lose a foot just from batting it off the shelf. That's what you get when you buy inferior toys, it wasn't even squishy like a toy should be, it was all shiney and hard! Made a horrible toy anyways.

I am all full up with the kibbles, I think some might be falling out my ears soon if I eat anymore...hmm I wonder if that would happen? I wonder who I can trick into trying it for me?

I of course reclaimed the land of Duckie north of the water heater once more. The humans have more or less given up trying to steal it back. It is a good time to be a citizen of Duckia; seeing as I am the only citizen of course it is good times for me! 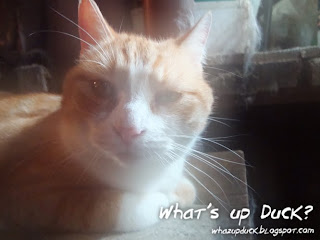 Spotted a squirrel yesterday; it was outside of course, spoil all my fun, but still got my mouth a drooling and my teeth a chattering. I could almost feel that fluffy squirrel tail in my mouth. When I bit down on it though I realized three things.
One, I was day dreaming as the squirrel really was outside.
Two, that Teddy Bear had also spotted the squirrel and while I was day dreaming managed to wiggle in front of me.
And three, that Teddy screams like girl when you bite his tail.

No lasting damage done but he won't be getting in front of me at the window any time soon.
MOL!
Meowed by What's up Duck? at 7:11 AM