I am swimming in treats of all kinds. I won a prize at the One World, One Heart blogger event.
And just when the human stopped making high pitched noises of excitement, I won again. And again. In fact I won SIX times! 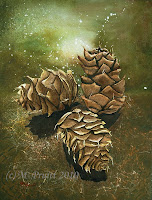 Then I won a necklace from A Frayed of Fibers

Then soon found out I won cat themed scrapbooking embellishments (those are so going on my pages!) from PawsN2Stamp 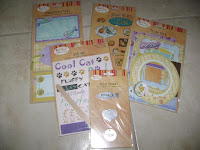 And just when I thought it was done, the human got another email saying I'd won two cat magnets from 3Cats Creations But I wasn't done having my lucky name drawn!
Because then Following Trolltacks informed me that I won her penguin through the Art Dolls Only giveaway. 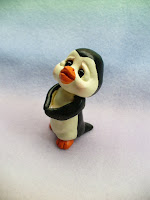 I figured this HAD to be the end of it until Papier-Welten sent out a mass email to everyone who commented. She asked those who came, to give her a request, something to do with paper and the most creative idea wins their idea realized. Well turns out Judith is really generous as she is fulling everyone's requests (all 44 of them), which means eventually (when she gets to me at the bottom of the list) there will be a cartoon of yours truely gracing the world.

I don't have a picture of this yet obviously.

This has been quite the adventure for both myself and the human. Ok so I slept for most of it, but typing is exhausting.
Which reminds me...I gotta go take a nap soon.
Hopefully next year the human will have a blog of her own and maybe even something to give away too. And hopefully the human's lap will be open for sitting when she does it all again, who knows, it may have been me sitting there through it all that brought in so many wins.

So my title as Lucky Ducky not only stands but flies to a challenge. I have more treats I can possibly eat (though the human won't let me eat em all at once *pout*) and my human is happily waiting for the mail.

Oh looks like the first package arrived! I gotta go see!
Meowed by What's up Duck? at 8:19 PM

Email ThisBlogThis!Share to TwitterShare to FacebookShare to Pinterest
Labels: one world one heart, OWOH, winner