Deputy Ducky on the case!

I was deputized today by one of the humans.
We're investigating grizzly murder of a brown mouse that was found in the basement today. It was a horrific scene, the poor mousy was dismembered, worse totally wasted as a meal!

The human kept trying to find the initial crime scene and decided to deputize me in the hunt for evidence in the brutal murder.

Our number one suspect is the only cat who had caught and killed many a mouse in the great big outdoors beyond our window also known as the 'OMG OMG WE'RE OUTSIDE SCARY!' place.

Her name is Smokey. Not sure who the bandit is but I'm leaning towards Bambi, he already has the mask.
Ahem as I was saying, her name is Smokey AKA Chirpy AKA Muffin head
I'd say with the amount of alias' she's already be convicted but alas Bambi has more. Even my bratty sister has a few more than 3.

This is a photo of the suspect. 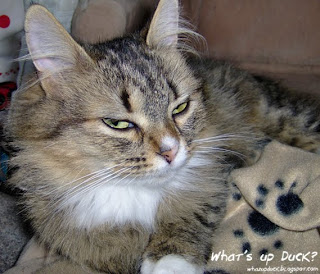 She has a certain evil gleam in her eyes.

Although I must say, all this excitement over a dead mouse, this 'investigation' is going to prove fruitless in the end. Mostly because we don't have any fruit trees but also because Smokey is a member of my crew. And a cat NEVER squeals like a mouse on any member of their crew.
Besides it just may have been an inside job. No one ever suspects the deputy.
Ho hum. er Meow?
Meowed by What's up Duck? at 10:31 PM