Welcome me back, cause here I am!

Despite the rumors, MY BUTT DID NOT FREEZE TO THE WINDOW SEAT!

I was just, thinking. Thinking about what snow tastes like. Yup, it's called SNOW Patches not "s'noooo" good try though, for a bratty sister.

I was also thinking that Christmas is coming soon, which means the humans are gonna bring us a tree to play with and pile funny boxes (some which smell like treats) underneath it like little steps for those of us less than agile who can't scale the base.

Not that I had any problems my very first year. I brought that tree to it's knees and had the branches stretched out to hold me up, even if I had to knock a few things out of it in the process.
Why do the humans fill those things with so many dangly toys, I mean I only have 4 paws, I can't possibly knock em all down in the few weeks the tree is up. Not that I didn't give it a valiant effort. I can't wait for the fun to begin!

Hmm I really do need to introduce more of the crew, at this point it's getting quite ridiculous so I'll do a quick one right here and now. 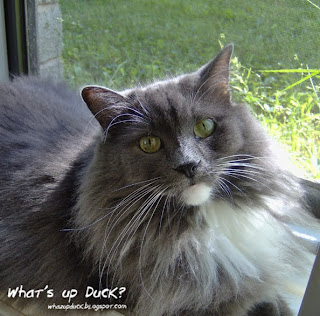 She is quite beautiful and quite willing to bite my ears off if I didn't tell you that. I happen to like my ears. She is one tough cat for such an decpetively dainty looking feline. I don't mess with her unless I'm feeling that lovely catnip buzz that makes a cat far too brave and far too stupid.

I am told by the older cats that Missy was rescued from an empty lot next to a garage of all places *looks around for missy, doesn't spot her* HA! *looks around again nervously* that was run by a cat hater.
She was removed from the area to save her life and I think also to intimidate every cat that came after her for good measure.

She has her cool moments, like when she spared my tail when I accidentally bumped into her one day and I think every crew needs a surprize attacker to defend the home territory from intruding cats and those horrible, horrible dogs.
Missy loves her attention and has many traits in common with my sister Patches (oh joy) and always arrives first for treat time (most of us have learned that claws don't really do well with a pile of treats).

Basically around here there are three girls(Patches, Missy and Mimi) who make it their job to act like they control the rest of us.
Us guys know better, when you know they aren't around to swipe at us.
I'm sooo not gonna be overrun by my bratty sister that's for sure!
Meowed by What's up Duck? at 3:01 AM