Ok so it's officially Christmas Eve but I'm anticipating a certain human giving me some nip tomorrow for Christmas and you don't want to see my typing on that stuff!

How about a couple of pictures? 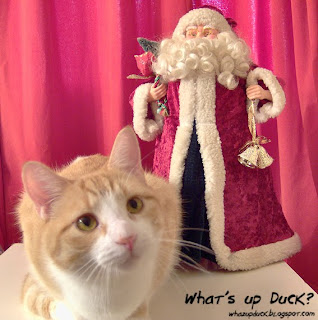 This is me, posing for a photo with Santa. I somehow thought he'd be...bigger. 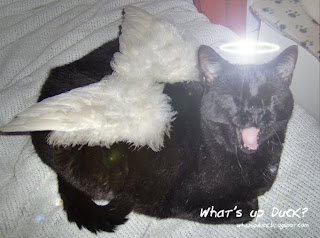 And of course every tree needs an angel on top so here is Toby sporting his wings.
Not that he's a real angel, or that he actually sits on top the tree...what does he do again?


I am anticipating a lot of fun tomorrow. I've been looking for hidden pressies all week and I know the smell of treats quite well, really you'd think they'd know by now. Hello, cat! Superior smelling power. Spooky just tried to tell me it has something to do with old factories...I wonder about him at times, really.
I even thought I heard the distinctive crunch of another crinkle ball in one of the bags but someone tied it shut and I couldn't very well rip it open when there's always a human around to come running and bust me.
A great many ornaments have been knocked from the tree and I am really exhausted from the effort. And kinda frustrated; none of them broke. Apparently the bottom half of the tree is covered in non breaking ornaments.
Who knew humans could learn stuff?
The top half still has the breakable kind though and that sounds like a challenge to me.

I hope all you cats, kittens and humans (because you bring us food and all) have a very Merry Christmas.
As for Santa, I'm keeping an eye out for you.
Meowed by What's up Duck? at 3:39 AM