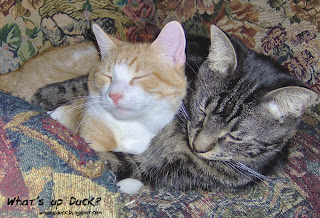 Me and my nannybug snuggling

Lokki is my best bud. When I was first brought in from outside I was alone. My brothers and sisters were still outside and I found myself among a bunch of hissing, yowling cats who wanted nothing to do with me. But Lokki, he took to me like a Duck to water hehehe. He became my tour guide, my teacher, almost a parent to me. He taught me how to brawl, helped clean my fur and cuddled next to me in sleep. 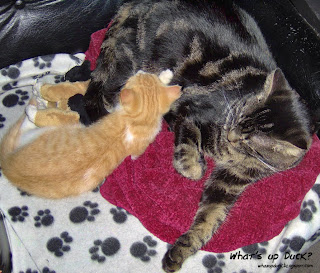 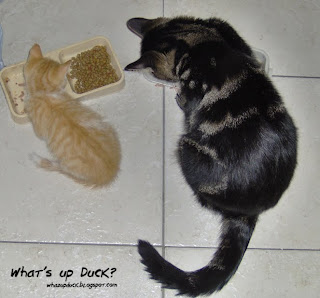 Whether it was snoozing or eating Lokki was there with me.
When my brothers and sisters were found we called him Nannybug. His nickname was Bug because he 'bugged' the humans all the time (he is quite good at it). He acted like he didn't like the name but I think he did anyway. He never once asked us not to call him it.

Lokki was the only cat that actually came from the Cowansville area. The story he told us is that he was outside wandering alone and saw some other cats come up to a window. Sometimes the humans would put food out, sometimes they'd invite the cats in for a meal. So when no one was around Lokki went up to the same window. Someone inside opened it for him and he walked right in like he always belonged there. He was still small back then and hadn't had a decent meal in quite sometime. He ate and slept and when he woke up he discovered that he was still there. He'd found a new home!
I wish more cats could find windows like that!
As time went by he found himself growing more and more lonely. The cats he stayed with were all much older and didn't want to play. When turned one year old he got the best birthay present ever, a kitten of his very own to play with, me! 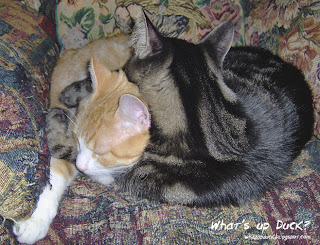 Every story should end with cat hugs!
Meowed by What's up Duck? at 10:49 PM