I thought I'd take a 'paws' from chasing crinkle ball and hanging with my crew to post a bit about the actual crew so you all know who I'm meowing about.

I'm the oldest (or so I'd like to think) of 5 kittens. We were found one by one (except my sisters who stuck together) out in the real world, in a field all alone. I was found first followed by Bambi then Patches and Foxy then Teddy Bear.
My brothers Bambi and Teddy Bear are both long furred, my bratty sister Patches and I are not. Our sister Foxy was also long furred but she went to the rainbow bridge when she was a kitten. We miss her still. 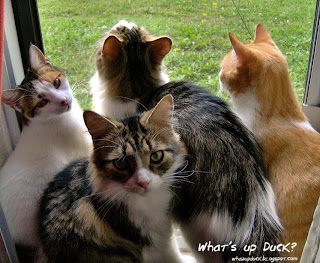 Left to right: Patches, Bambi, Teddy and Me!

Patches is who I call my bratty sister. She was very sick as a kitten and almost followed Foxy to the rainbow bridge. Everyone was very worried (even me) but then she got better. She learned fast how to manipulate her human who helped her get better and became the center of attention for a long time. She likes picking fights with me, Bambi and Teddy then running off squealing to her human when we fight back. Then we get yelled at. So unfair! Despite being the brattiest sister, she's also quite tough when she wants to be and I'm glad (mostly) to call her part of my crew.

Bambi is my very confused brother. I say confused because for the first few months living indoors everyone but us cats thought he was a girl. He flirts with everyone he meets and acts sweet enough to give the humans cavities so I suppose it's little wonder. Bambi is a big fan of the arts having been called 'show cat' on more than one occasion. He has a very poofy tail he likes folding backwards onto his back. He says it's more 'dramatic'. Despite his softer side I've taught him a few moves and now he can brawl with the best of them. He probably sees it as researching a character though. *sigh*

Teddy Bear was the late arrival having been found much later than the rest of us. He is wise for his years knowing the perfect balance of attention seeking and solitude. He'll hide away for hours in a place no one knows of, contemplating the universe or just snoozing. He is best buds with Bambi and when he's not hiding away somewhere can often be found snuggling with him. The humans call them the twins because they say they look so much alike. I don't really see the resemblance. For one thing Teddy has freakishly long fur. I'd doubt he was fully cat if he wasn't my brother.

Then there's me.
I'm big, I'm orange, I'm a tabby with 'tude. I shy away from the affections of the humans until they're otherwise occupied. I especially love getting nice and affectionate right when everyone is asleep and rubbing them awake only to dart away the minute they give in. My bestest bud in the whole world is Lokki who I'll be talking about next time.

Right now I'm off to catch up on the sleep I missed while typing this. Maybe even bat old crinkleball around so he knows I haven't forgotten him.
Life is good.
Meowed by What's up Duck? at 9:47 PM