Night at the Theater

You know I'm all for high culture, it's great to snooze through. So the crew arranged to have their very own production of Romeo and Juliet a little while back.
Now I'm not one to criticize, if I don't like something I just annoy the kibble out of people by not participating in any possible way. But I think my brother Bambi has gone too far. 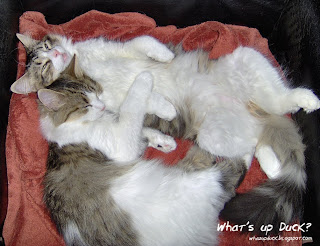 Yes I know that in the original time of Shakespeare all the actors were guys but we're cats!
And we happen to have a few girls in the crew, one of them being my bratty sister. So Teddy and Bambi played Romeo and Juliet and yes they're both boys (though some people still won't believe me about Bambi).
It was a very moving play...tail moving anyway. Mine was lashing all over the place!

Disclaimer: No cats were harmed for the photo, Bambi really is that good of an actor...er well that and he kinda fell asleep. Yes he sleeps with his mouth open, eyes open. Our human told us sleeping like that will catch flies but I haven't seen a single one fall for it yet!
Meowed by What's up Duck? at 10:08 PM